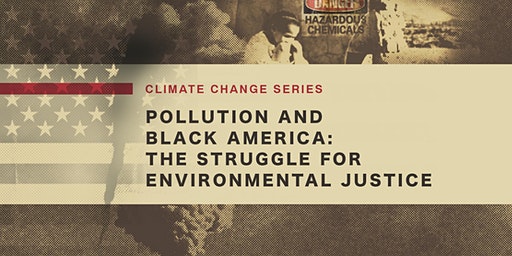 The Colin Powell School at CCNY hosted this lecture on environmental justice on October 1st, 2020 as a kick-off to their second year of the undergraduate Climate Policy Fellows Program. It can be viewed the Colin Powell School YouTube channel below. Additional information is also copied below from the Youtube post.

While Black communities are far more likely than other Americans to be exposed to the harmful impacts of pollution, they have historically been left out of the environmental movement. Join us for a conversation about the devastation caused by the intersection of institutional racism, climate change, and the current pandemic—and what the next generation of activists and advocates can do. This event marks the kick-off of the second cohort of the Colin Powell School’s Climate Policy Fellows Program.

Linda Villarosa is an award winning journalist and author, and Director of CCNY’s Journalism Program. She is a contributing writer for the New York Times Magazine, where she covers race, inequality and health. Her 2018 cover story, “Why America’s Black Mothers and Babies Are in a Life-or-Death Crisis,” was nominated for a National Magazine Award. Her 2017 article, “America’s Hidden HIV Epidemic,” won a National Lesbian and Gay Journalists’ award for Excellence in Journalism. She was previously executive editor of Essence Magazine. She is the author and co-author of three books, including Body & Soul: The Black Women’s Guide to Physical Health and Emotional Well-Being. Her first (and only) novel, Passing for Black, was released in 2008 and was nominated for a Lambda Literary Award.

Shawn L. Rickenbacker is a trained architect, urbanist and urban data researcher. He is currently the Director of the J. Max Bond Center for Urban Futures where he directs the Center’s sponsored research and is an Associate Professor of Architecture at the CCNY Spitzer School of Architecture. His research and work at the Bond Center directly confronts the complex intersection of spatial equity and the social and economic impacts of place-based policies, programs and design through the lens of urban data, forensic and design research. His work and research have been published in The New York Times, NY Daily News and Global Architecture and exhibited at Studio Museum of Harlem and most recently at Temple University. Shawn holds a M.Arch. with a Certificate in American Urbansim from the University of Virginia where he was the Dupont Scholar and a BArch from Syracuse University.

Trevor Houser is a CCNY alumni and directs the Climate Policy Fellows program. He is currently a partner with Rhodium Group where he leads the firm’s Energy and Climate Practice and co-directs the Climate Impact Lab. His publications include Economic Risks of Climate Change: An American Prospectus; Fueling Up: The Economic Implications of America’s Oil and Gas Boom (co-authored with Shashank Mohan); and The Positive Agenda for Climate and Trade, among many others. During 2009, Trevor left Rhodium temporarily to serve as a senior advisor at the US State Department, where he focused on international energy, natural resource, and environmental policy issues. He was also a Visiting Fellow at the Peterson Institute for International Economics.