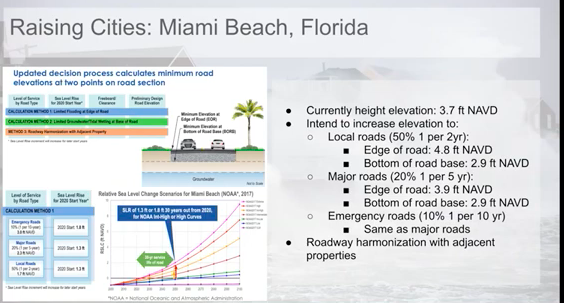 The US Atlantic Coast is one of the most vulnerable areas in the world to sea level rise (SLR) because of its low elevation, large population concentration, and economic importance. In addition to SLR, coastal communities like New York City can expect an increase in flooding events and unpredictable weather patterns in coming years. Under current emission trends sea level will continue to rise throughout the twenty-first century. The Northern Hemisphere is expected to experience an increase of up to 30 percent maximum precipitation (Banholzer et al. 2014).

NYC and the North East Coast of the United States is more vulnerable to natural disasters than ever before.  In 2012, Superstorm Sandy led to $50 billion of economic losses and $25 billion in insured losses (Banholzer et al. 2014).  The economic losses and infrastructure destruction occurred beyond the bounds of the greater New York area.  Social distress and environmental degradation were also major impacts of Superstorm Sandy.  NYC experienced the brunt of the storm surge and associated damage: seventeen percent of NYC’s land flooded, resulting in 44 deaths and $19 billion in citywide damages and lost economic activity (NYC EDC 2019).

This method proved to be the best solution in North Carolina; the ecosystem productivity and services are preserved including the protection of the coastal land. In a study, five transplanted marshlands were able to seamlessly integrate themselves into adjacent marshes, ages ranging from 12 – 38 years. A living shore line like a constructed marsh decreases soil erosion while maintaining soil structure and coastal integrity (Davis, J. et al. 2015).

An alternate to terrestrial ecosystem restoration is oyster-reef restoration in oceanic intertidal zones in coastal communities. The presence of oyster reefs increases biodiversity and abundance, decreases shoreline erosion, and provides a socio-economic benefit for the coastal community. Due to their nature, oyster reefs naturally build and erode over time and take little to no maintenance. The restoration cost of oyster reefs is estimated by the Army Corps of Engineers to be between $5 and $15 per cubic yard in the New York-New Jersey Harbor (Yozzo, D. 2004).

Raising cities is a strategy used by low lying cities to alleviate SLR problems. It helps to decrease the frequency and amount of infrastructure damaged due to flooding events. One approach is raising street elevations, which has 2 issues: cost of raising roads and effects it has on adjacent buildings (Bloetscher et al, 2014). This process requires adjacent buildings to install water pumps to remove stormwater from their property. Another approach in elevating cities is raising buildings based on the base flood elevation will reduce the amount of flooding on properties.

Miami Beach is ground zero for sea level rise amongst U.S. coastal cities (Andragna, 2014). In addition to regular high tides, the city also experiences King Tides, the highest high tides. Miami Beach is currently elevating 105 miles of street and intends to raise the entire city within 10 years (Ruggeri, 2017 and ULI, 2018). Urban Land Institute (ULI) Advisory Service Panel Report shows Miami Beach in 2018 was able to obtain $600 million dollars for its Stormwater Management Program. A top-down approach was utilized to implement the street elevation policy. One of the city’s successes is the 2 feet street elevation done in Sunset Harbor Neighborhood (Miami Beach Rising Above, 2020a). This neighborhood was once the lowest point in Miami Beach and now has been protected against 60 tidal floods (Harris, 2020).

Many praised Miami Beach’s approach to taking actions against SLR. Many other cities view them as an example and as a solution. Their top-down approach in utilizing grey infrastructure to solve its problem was very controversial (Harris, 2018a). When this project was first initiated, all decisions were made by the government with only consultation of SLR experts. The communities were not involved in any initial decision making processes, resulting in confusion, reluctance and resistance in cooperating with the government (Harris, 2018b). Over the years residence involvement in the discussion has increased because the government realized the importance for these conversations.

Raising cities is a short term SLR mitigation strategy effectively applied at a small scale. But to apply this strategy to an entire city and at a very fast rate, lots of problems will emerge, slowing the process down. Eventually it would be impossible for a city to continue investing in projects elevating the city.

Newtok is a Native Alaskan Village inhabited by the Qaluyaarmiut for the last 2,000 years, an indigenous Yup’ik Eskimo population that lives a traditional fisherman-subsistence lifestyle (Feifel and Gregg 2020).  The village is located on the Ninglick River in the Yukon-Kuskokwim Delta Region, which poses many natural hazards accelerated by climate change in the last 30 years. The Ninglick River continues to erode the Newtok shorelines, which has been exacerbated by thawing permafrost, declining sea ice protection, increased storm surge exposure, and warming temperatures (Feifel and Gregg 2020).

Negotiations on village relocation began in 1994, when the Newtok Traditional Council considered the Mertarvik site as a new home, due to progressing erosion issues.  In October 2019, the Qaluyaarmiut began their community-wide relocation from Newtok to Mertarvik. The new location provides natural protection from SLR, eroding river banks, and flooding events.  Phase one of the relocation process consisted of 21 households, accounting for roughly a third of the 370 Newtok population (Lester 2019). This relocation effort will take years to complete, including the finishing of the new Mertarvik community components.  The Newtok Managed Retreat and Relocation project is estimated to cost between $80 million to $130 million, roughly $2 million per household, including weather resilient homes and a community Evacuation Center; the funding sourced form many different supporting agencies (Feifel and Gregg 2020, Lester 2019).

The Newtok Alaska Relocation plan for the resiliency of the Indigenous Qaluyaarmiut people proves the many challenges associated with managed retreat strategies.  Newtok Relocation and Mertarvik community development will continue for many years in the future. Although much difficulty was associated with the project, this case study also highlights the positive results of community-wide managed retreat in isolated communities.  The movement of the Qaluyaarmiut people from their historical home is not ideal, but necessary to promote social resiliency of their cultural existence.

Human driven climate change and associated natural hazards will impact all sectors and dimensions of sustainability throughout vulnerable coastal communities.  Localizing the issue will allow communities to address their needs in ways appropriately serving their critical systems, agents, and culture.  Sustainability thinking and resiliency development of city institutions are essential for increasing public-private partnership capacities within this arena. The precautionary principle must be adopted to ensure minimized impacts, losses, and downtime following a natural hazard. It is imperative to focus on building more disaster resilient, sustainable coastal communities through a hybrid approach that focuses on the specific vulnerabilities and needs of NYC communities.